Get the report
Report Archive

How do companies choose the nonprofits they support?

In what ways is the COVID-19 pandemic affecting corporate giving?

These are just a few of the questions we asked Central Texas companies.

The Central Texas corporate community is incredibly generous. Time and time again, they step up to address our community’s pressing needs when it matters most. 2020 has been a challenging year for everyone, and we hope our findings provide useful insights to inform your corporate giving efforts. We also hope this data will provide meaningful benchmarks to measure your philanthropy against other Central Texas businesses.

Furthermore, we encourage the nonprofit community to use these insights to better understand how companies prioritize giving, along with their philanthropic goals, methods, and measurements for success.

Together, equipped with this information, let’s work to increase generosity for the benefit of all in our community.

Philanthropy among Central Texas companies takes many different forms, including monetary donations, employee volunteerism and the donation of products or services. These contributions are crucial for many nonprofits that depend on this support to provide critical services in the community.

Since 2020, the COVID-19 pandemic has introduced unexpected challenges to this dynamic. Last year’s survey measured some of the changes and trends resulting from these challenges, and our 2021 survey marks a continuation of our efforts to draw insights into how COVID-19 remains a factor in companies’ philanthropic decisions.

While the findings certainly show the continuing impact of the pandemic on corporate giving in Central Texas, several metrics suggest that the landscape has stabilized – welcome news for local businesses, and the nonprofits that count on them for support.

Here are just a few  of the interesting findings in this year’s report:

Effects of the COVID-19 Pandemic

A majority of survey respondents, 53%, affirmed that COVID-19 changed their organization’s giving. The good news: This marked a significant downtick from 2020, when 75% of respondents said the pandemic affected their company’s philanthropy. 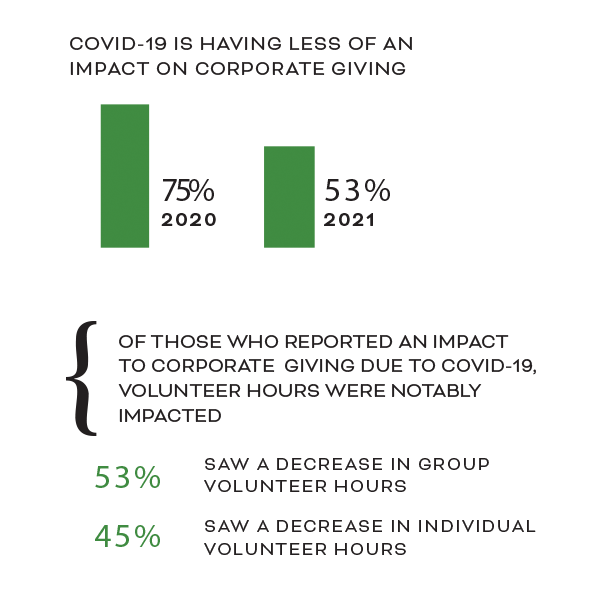 When asked how organizational giving budgets changed, we see a return to the norm: The largest share of respondents, 43%, said their giving budgets increased over last year. Even more notably, only 9% reported a decrease – suggesting that the effects of the pandemic on giving budgets is stabilizing.

This year’s survey shows the pandemic’s effects on volunteering might be stabilizing, too. Only 16% said their company’s employee volunteerism decreased; compared to 50% in last year’s survey. A third of respondents, 33%, said volunteerism increased from 2020-2021, and 30% said it remained the same.

What motivates companies to give? The highest percentage of respondents chose support of the community/altruism, 88%; public goodwill, 67%; and reinforcing workplace culture, 55%; as the most important drivers for their philanthropy.

When asked to identify each of the different ways in which they give back, most cited monetary donations from the company, 85%; and volunteer hours, 68%. There was an uptick in those who selected donation of other products or services: 43%, compared to 18% in 2020.

While the largest percentage of respondents said their company does not measure the ROI from their charitable giving, 43%; nearly as many said that employee participation was their most important measure of success, 40%. 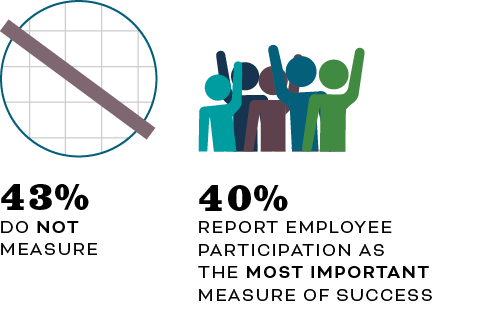 In a subtle reshuffle from last year, when education-focused nonprofits topped the list of the types of nonprofits companies were most likely to support, human services is now ranked number one, 62%; followed by health & wellness, 61%; with education still ranking high, 52%.

A majority of respondents see no downsides to organizational philanthropy, but this percentage dropped from last year: 63%, compared to 85% in 2020. One perceived negative: Nearly a third, 31%, said that selected causes may not always align with individual employee values. 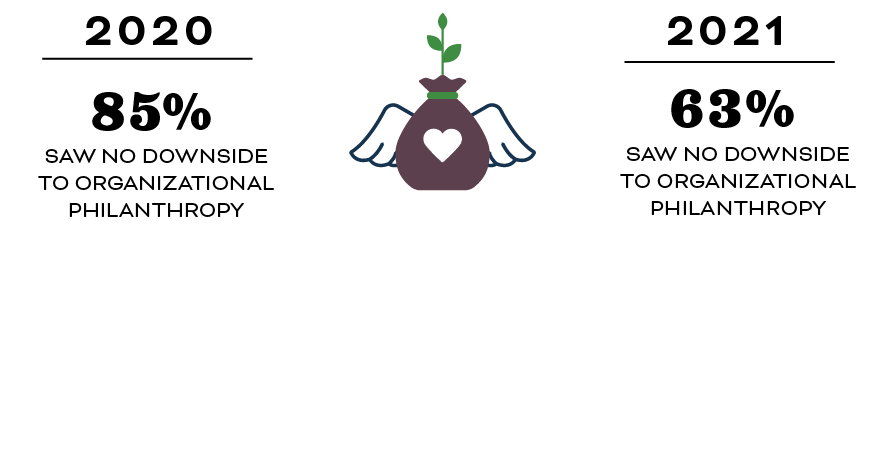 Do Central Texas companies have philanthropy budgets, and did those budgets increase or decrease this year?

Who spearheads giving initiatives at local businesses, and how do companies choose the nonprofits they support?

In what ways is the COVID-19 pandemic affecting corporate giving?

The 2020 Central Texas Corporate Giving Survey asks these and other insightful questions to help business leaders, nonprofits, and the community they serve to better understand the pulse of philanthropy among local companies.

The survey is distributed to hundreds of local businesses. After the survey results are compiled and analyzed, the findings will be presented in our Central Texas Corporate Giving Report this December (which will be available here on Growing-Good.org).

The Central Texas Corporate Giving Survey is the brainchild of Lisa Rodman, a 20-year veteran of the nonprofit arena and principal and founder of Rodman & Associates.

While advising companies and foundations in their philanthropy, Lisa realized there was an unmet need to gather detailed statistical information about corporate giving in Austin and Central Texas.

Drawing from her extensive knowledge of the charitable sector and corporate philanthropic initiatives, Lisa launched the Survey of Corporate Giving in Central Texas in 2015. The results of the survey were then published in the first Rodman Report.

Over the next five years, the survey and the Rodman Report would expand and evolve to gather more insights and benchmarks, becoming a valuable resource for both companies and nonprofits.

As Lisa noted: “Every year, the study provides new metrics that help companies understand how their giving compares to others in the community. The insights are also critical, however, for nonprofits to see how their needs align with the giving priorities of Central Texas businesses.”

Each edition of the Rodman Report is still available for download:

We invite you to share and/or republish the findings from our study. Please attribute your reference(s) to the Central Texas Corporate Giving Survey.